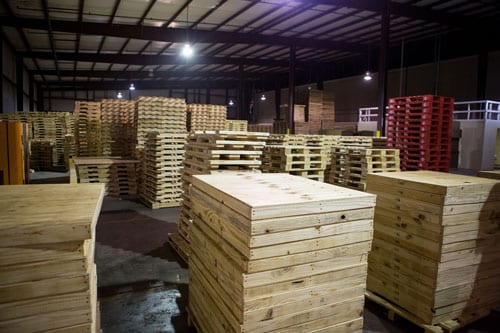 General Pallets, Inc. is ISPM-15 certified. But what does that mean?

ISPM-15 stands for International Standards for Phytosanitary Measures No. 15. Its purpose is discussed in the article An Overview of ISPM-15 by The Balance; “The main purpose of ISPM-15 is to prevent the spread of insects and disease that could have a negative impact on plants and ecosystems through international transport.” The article goes on to explain, “The basis of the issue is that pests can be harbored in untreated solid wood, and when shipped internationally, they can devastate ecosystems in other parts of the world.”

The ISPM-15 requires all non-manufactured wood and wood packaging materials to be treated in one of three approved ways listed in an article by the National Wooden Pallet and Container Association (NWPCA): conventional heat treatment (HT), dielectric heating (DH) or methyl bromide fumigation (MB).

All three are permitted in the U.S., but heat treatment is the current standard practice, according to The Balance, and is regarded as the “most effective and environmentally friendly way to destroy harmful pests from wood”. This process kills pests by heating the wood packaging materials for a set amount of time, or until it reaches a certain temperature.

According to the NWPCA, “These treatments, when properly implemented, have been scientifically proven to achieve 100 percent mortality of quarantine pests at an extremely high level of reliability.”

Why is it important?

As explained in the article by NWPCA, the International Plant Protection Convention (IPPC) developed standards like ISPM-15 for an important reason. “The application of these standards is designed to protect forests and ecosystems by reducing the likelihood of non-native pest infestations, preventing both loss of species diversity as well as economic losses associated with the costs of pest eradication and control.”

The ISPM-15 was implemented in 2005-2006, and it has proved itself effective. According to the NWPCA, “Since the wide-scale adoption of ISPM-15 in the United States, there have been no new large-scale establishments of invasive wood-boring insects.” In addition to the U.S., “There are more than 100 countries around the world that have adopted the ISPM-15 regulation for wood packaging, and the list continues to grow.”

ISPM-15 has been an important and effective regulation. You can be sure that all the wood packaging products at General Pallets, Inc. meet the ISPM-15 regulation, and therefore plays a part in protecting our forests and ecosystems.